When it comes to finding food, the animal kingdom can be a ruthless place where crabs feed on birds, gators feed on gators, and raccoons gorge on so much bread that they get stuck in sewers. But no gruesome cannibalistic scene or carbo-loaded feast compares to the sight of this freakishly sized boar rummaging through the trash in Hong Kong. Behold, the very hungry, very large Boar King: 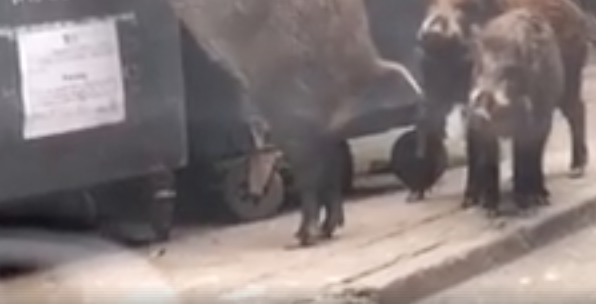 Facebook user Tu Dong uploaded footage of the gargantuan beast last week, and the thing puts even that Planet Earth lizard-snake scene to shame. As you can see, it is large enough to prop its front two legs up on a dumpster and root through the trash inside, pulling this way and that on a particularly enticing bag with its massive maw. Meanwhile, its mini (or regular-size?) pig friends mill about on the sidewalk, waiting for their share of the feast. Somehow, the beast’s tiny legs manage to support all that weight.

According to the Daily Mail, the Mack truck of a porker happened to be gorging on trash a few blocks away from an elementary school, which caused some concern among the folks who saw the video on Facebook. Mostly, though, people were just in awe of the giant beast, saying something to the effect of—if Google translate can be trusted—”just let the damn thing eat.”

“It’s so hungry,” one commenter wrote. “Wild boar has the right to live and freedom. He is only hungry for food.”

“Pityful,” another chimed in. “They are hungry, my goodness.”

Check out the full clip above and decide for yourself whether Boar King could take on that really, really big gator in a fight.

Sign up for our newsletter to get the best of VICE delivered to your inbox daily.

Related: Wild Boars Are Getting Kicked Out of Deserted Japanese Towns