All adorable cats are worth loving, but only the best and brightest will become memes. And one cat, in particular, named Zuu, is full of meme potential. He’s so round that he looks like a ball of fluff. He’s a lovably grumpy cat. He has markings on his fur that make it seem like his mouth is constantly open and that he’s eternally surprised. What’s not to love?

If you thought that one funny cat was enough for you to stay motivated, lift your spirits and keep you working hard until the weekend, well, have we got a surprise for you. It turns out that the adorable Zuu lives with another cat – Bocco. The two felines are sure to give you a laugh and make you want to cuddle them. They both look so chunky and disappointed with life that it’s nearly impossible not to smile. 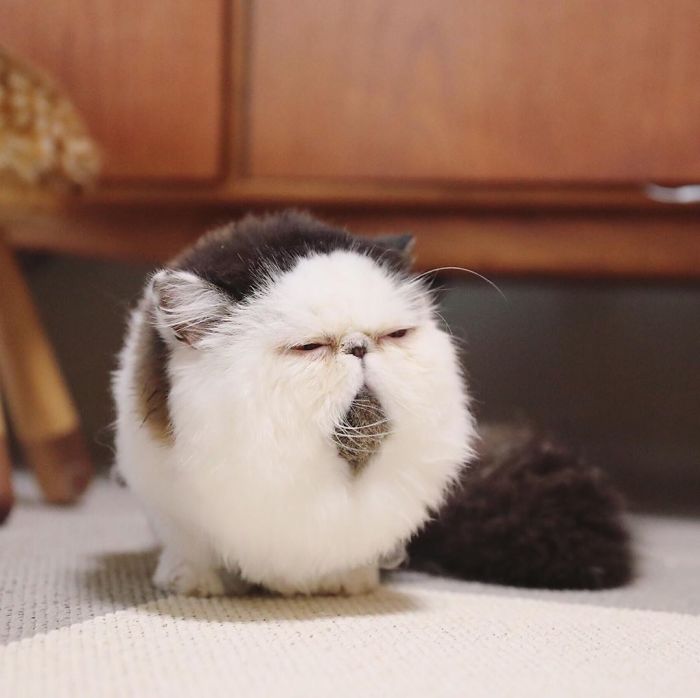 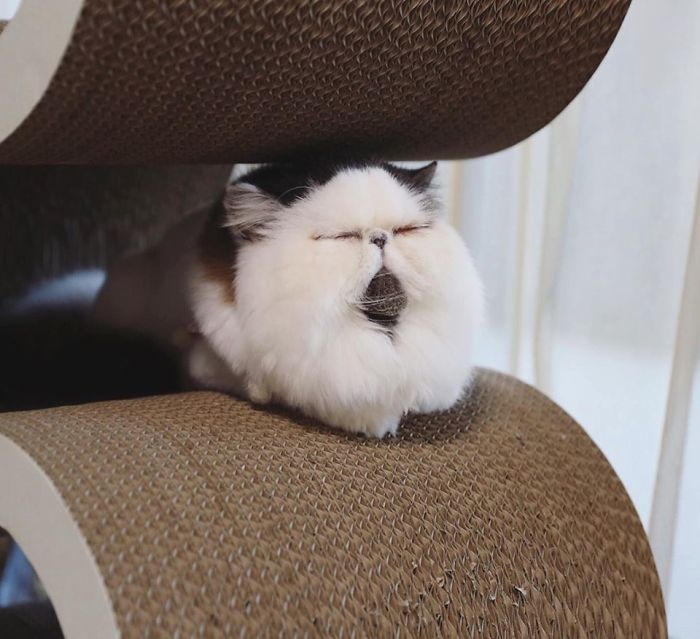 Bocco and Zuu’s owner Chika, who goes by the handle pechanko_bocco, regularly uploads her cute cats’ photos on Instagram, with a huge archive of 1,720 posts and counting. Over 33,400 people follow the two felines’ antics. Bocco is an Exotic Shorthair cat born on June 26, 2016. While Zuu is an Exotic Longhair who’s a bit younger – he was born on August 21, 2017. Both of the exotic cats are male.

Zuu and Bocco’ss owner Chika told Bored Panda in an exclusive interview that the “two cats sleep all day long while I’m at work – I assume that they sleep around 20 hours a day.”

“Bocco is a shy boy and not used to strangers, but he loves getting a massage from me and stalks me around everywhere in the house. He also used to be good friends with the hedgehogs that I used to have. Zuu is more open to others and not afraid of dogs that he meets in the park.”

Chika also revealed to Bored Panda: “I used to upload pictures of my hedgehogs on Instagram, so it was kind of a natural thing to do for my cats as well. I’m really surprised that we are getting so many followers recently. I am very happy when I see positive comments that say the pictures made them smile, for that is also how I feel looking at them.” “Since the famous cats have a flat face, I need to wipe their tear stains off every day. Their tears are brown, typical with their breed,” Chika explained about caring for Zuu and Bocco. “Also, they are super lazy and won’t eat by themselves. I need to bring the food pellet to their mouths. I do leave some food so that they can eat when I am late coming back home from work, but they just keep waiting for me to come back home and feed them with my own hands. They eat human-grade and grain-free cat food. They also take some supplements.”

“Zuu doesn’t have good athletic skills so he’s not good at heights nor jumping. He still hasn’t been able to reach the top of the cat tower,” joked Chika.

Some of you might have already fallen in love with the cat meme-worthy Bocco and Zuu (we know we have). But it might be the first you hear about Exotic Shorthair and Longhair breeds. Fear not! Here’s some basic information you need to know to get started.

Exotic Shorthairs first came into existence in 1967, after crossing Persians with British Shorthairs. The Trupanion cat guide writes that the new breed inherited traits from its forefathers, including the easy-going attitude of the Persian, and gained the easier coat maintenance and higher energy levels of their shorthaired cousins. Exotic Shorthairs are great pets for families with kids because they’re very playful, but also don’t demand constant attention.