He is a gorgeous cat known for his bicolor face, and he has become the father of two adorable kittens who share the hues of his face.

The unexpected part is that they have each taken the hue of one side of their face. Narnia is three years old, and he has an unusual genetic feature that sets him apart from others: his face is divided in half by two distinct hues.

Narnia is a French cat born in Paris who now resides in the United Kingdom with its mother, Stephanie Jiminez. With his attractiveness, he has stolen everyone’s heart since his arrival.

His face is extremely distinctive; he has a gray and a black side, as well as lovely blue eyes, which is a rather unusual coloring.

THE FATHER OF A TWO-COLORED FACE CAT 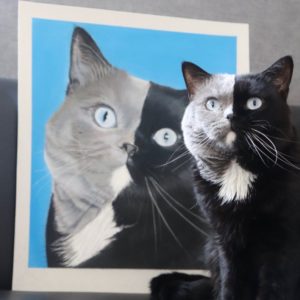 “I was taken aback when Narnia was born. I could tell it was special right away. Narnia was born with an extremely uncommon black and gray double face.»

In general, these features are caused by chimerism, a natural situation in which an individual has two distinct types of cells, each with a different genetic composition. It indicates that male cats have an additional X chromosome throughout their embryonic stage of development. 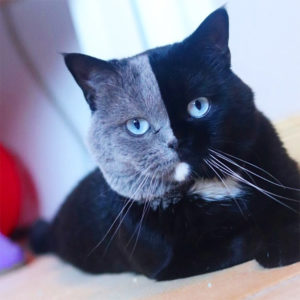 However, in the instance of Narnia, this uncommon abnormality does not apply because specific genetic testing indicated that it was not chimerism.

“A scientist ran studies and determined that Narnia had only one DNA… he remains a scientific enigma.” 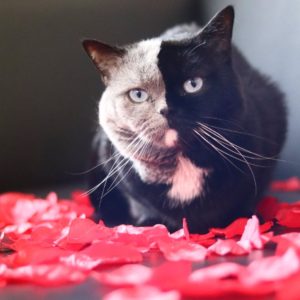 “He also has lovely blue eyes, which is unusual for a totally black cat. Blue eyes are commonly found in white cats.”

The essential thing to remember here is that Narnia became the father of two lovely kittens, one gray and one black, to match the hues of its face. 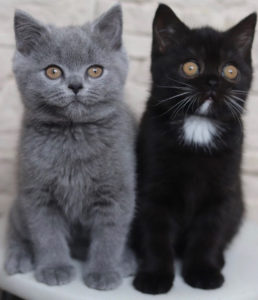 The gray-haired Phoenix and black-haired Prada kittens were born last year and have captured the public’s attention. Not only for her beauty, but also for inheriting every hue of its father’s face. 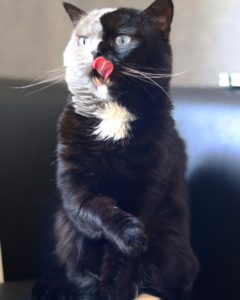 The lovely furry man, according to Narnia’s owner, handles the job of father extremely well and is quite delighted with his two creations. 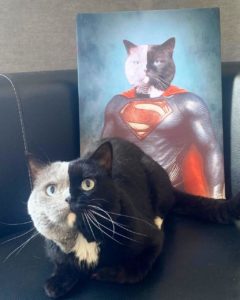 «Narnia is doing well and enjoys playing with her kittens.»

However, this is not Narnia’s first time as a father; he has been a father numerous times before, and each of his offspring has a distinct color variant. 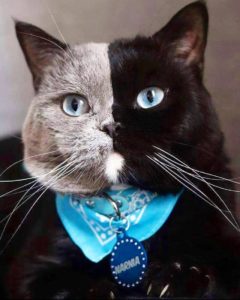 Narnia has two gorgeous multi-colored offspring, Polaris and Phantom, as well as two light brown twins, Orfée and Ozanna, a black Roswell, and a gray rose.

The other cats, unlike Phoenix and Prada, have inherited Narnia’s stunning blue eyes, producing a new gene termed “ice,” according to Stephanie. 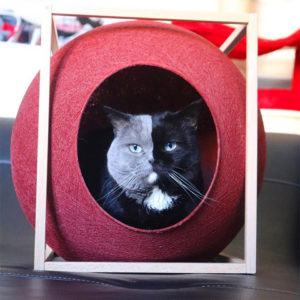 Aside from becoming a father, this cat lives a life full of care and adventure.

Its kittens are doing well, Phoenix has found a permanent home after being adopted by a family, and Prada will be moving in shortly as well. 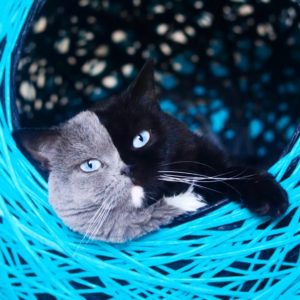 For the time being, people will continue to marvel at Narnia’s gorgeous and unusual look, as well as its adorable cats.