Because of their power and size, bears can be scary, yet they can also be charming animals. A guy who has had a black bear visit him for years brings her fresh new cubs to see him in this video. It’s a beautiful moment. Black bears are reported to be highly numerous and friendly to humans in this region of America. Bear populations are exploding in Asheville, North Carolina, and they appear to have settled in with the locals. Starting in late summer 2017, a bear family began visiting Patrick Conley on a regular basis, nearly becoming like family to him. 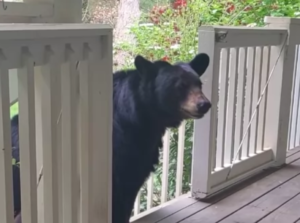 In this video, we witness Patrick’s bear, Simone, emerge from the woods to greet us. This is a common occurrence for Patrick, but what she brought with her was a complete shock. Her first litter of cubs trailed behind her!

When Patrick first saw the cubs, he couldn’t believe his eyes and even commented in the video’s description that they were the prettiest creatures that had ever walked these woods, although he is prejudiced. Patrick considers Simone to be a close friend, so seeing the cubs is like meeting a new family member. 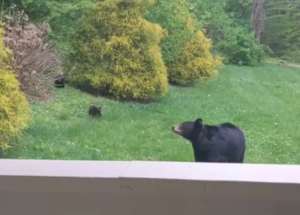 Simone is so relaxed that she goes directly into the porch, followed closely by the cubs. Simone comes onto Patrick’s porch, indicating that she is quite comfortable with him and considers him to be a friend. Because they’ve never been here before, the cubs are a little more wary, but they trust their mother. Patrick is absolutely taken aback when all three bears appear on the doorstep and greet him. It’s incredible to witness an animal that doesn’t often associate with humans be so friendly. The three bears leave the porch after a while and stroll across the street to climb a tree for a while. 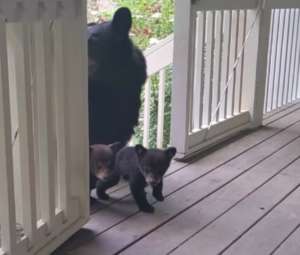 The cubs are acclimating to their new surroundings and enjoying their explorations. Both cubs dash to the nearest tree to climb and play with one another, while the mom bear waits close by. Simone informs her new cubs it’s time to go home after a period of exploring, climbing, and playing. The three return to the jungle to return home. Patrick observes that Simone is well-fed, and that given how close they all came to him, they will be returning soon, which he anticipates. 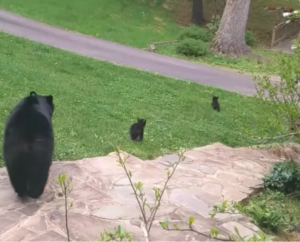 Check out this man’s YouTube channel if you want to watch his entire encounter with these bears. Fortunately for us, we can follow Patrick’s adventure with the bears from the start, and it’s an incredible experience to witness. Maté, the mother bear, is now grandma to three bears: her heavy son Maurice, timid Solange, and Simone, who we see in the film. 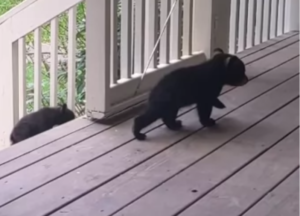 Patrick now has to come up with two additional names for the family’s newest members. What a lovely moment with nature that was captured on film.
Check this adorable video of this beautiful little family.