After meeting for the first time in months, the puppy rested happily on a stone fence and kissed the calf.

When a golden retriever puppy and a cow were reunited six months later, they became great friends. 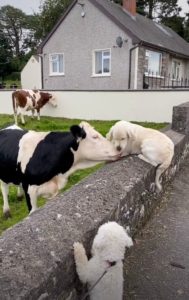 During the lessening of lockdown in August 2020, Blanáid May of Ireland was walking her cockapoo in the neighborhood when she noticed a dog kissing a calf at a neighboring farm.

The golden retriever had encountered the newborn cow six months earlier, at the beginning of the year, according to the 28-year-old.

In the video, she explains: “The puppy then went missing for three months. Then the calf reappeared, and they reconnected.”

The dog leaps onto a ledge while waiting for the calf to arrive. 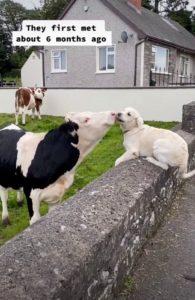 One person wrote: “Animals are better at getting along with one another than we are. This is very lovely and pure.”

Another person stated: “This is the most heart-racing thing I’ve ever seen. We don’t deserve these magnificent creatures.”

Others, on the other hand, were saddened by the prospect of the calf being butchered.