A tiny baby otter appeared one day at a riverbed in South Africa. A group of kids saw the otter and were all surprised.

So they decided to search for otter’s mom but it was nowhere to be found. But suddenly otter started following them while kids where going at their homes. 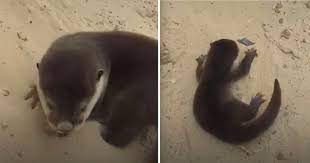 Candice from Ikhala Veterinary Wildlife Services helped immediately this little otter after kids told her about.

“He was so perfect,” she told The Dodo. He was so cute, soft and fluffy at the same time.

His name is Toto now and was sent to Johannesburg Wildlife Veterinary Hospital. There, Toto met Oscar,an orphaned otter.

Toto was a bit bigger than Oscar but they become inseparable very soon.

They are both so cute and are getting better day by day.