This 8-year-old boy who weighs in at 28 pounds is stealing everyone’s hearts and is bound to steal yours. Meet Wilford—a chubby cat that came to a local rescue for a chance at a new chapter in his life. This heavy heartthrob was brought to a shelter after his original owner could no longer care for him. The poor fella came in dirty, severely obese, and in desperate need of love and medical attention. Luckily, the kind-hearted people at Lost Dog and Cat Rescue Foundation⁠ took the adorable cat in and brought him to Pokey Pot Pie where Wilford is now fostered and on his way to be back into a healthy shape. “Wilford came into foster with us (through Lost Dog and Cat Rescue Foundation) in late December after being surrendered by his former owner to a shelter in rural Virginia,” Jen, Wilford’s current caretaker told Bored Panda. When he arrived at his foster parents’ house, Wilford was struggling to eat as he was stressed out and overall overwhelmed by the changes happening in his life. “In addition to being a dangerously overweight cat, he was also severely matted and his entire coat was in rough shape. He was shaved down, which is why he looks a bit unkempt in a lot of his photos,” Jen added. 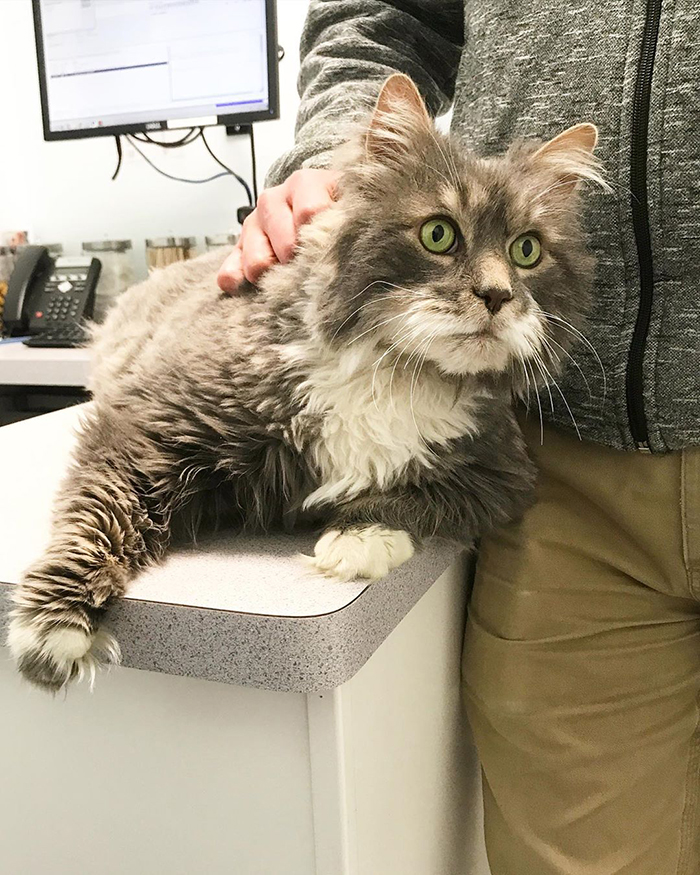 As with any cat, the transition wasn’t easy for Wilford. His caretakers told us that he had to get used to a new home, routine, people, and even other cats. “When Wilford first arrived, he was really struggling. Transitions like this are difficult for any cat, and Wilford was no exception. He had just lost his family, home, and routine. He was in a new environment, with new people, new smells, new sounds, and other cats,” Jen told Bored Panda.

When Wilford’s foster parents brought him to the vet, they discovered that the cute cat was suffering from asthma as well as a mild upper respiratory infection. He was in and out of the vet several times for treatments until his health was finally stabilized. “While Wilford obviously needs to lose weight, cats, especially severely obese ones, need to do it slowly or they can run into problems with hepatic lipidosis (fatty liver disease). In his first week, we really struggled to get Wilford to adjust to his new healthy diet and eat. He was so stressed out that he barely touched his food. We took him to the vet twice within the first 2 weeks for blood work, x-rays, appetite stimulants, anti-nausea meds, etc.,” Wilford’s foster mom Jen added to Bored Panda.

Once Wilford got better, his caretakers Jen and Ian started tackling the big boy’s weight. “Wilford is currently weighing in at 28 pounds. He should be about 14 pounds, so he will eventually need to lose half of his body weight. For now, though, we are still trying to help him feel comfortable and safe. He is an absolute delight and we are so grateful to have the opportunity to spend time with him,” they wrote on Instagram. “It took several weeks (and trying approximately 15 different types of cat food) to get him eating regularly. We’ve had to deal with several other health issues along the way, but he is finally stable, slowly losing weight, and doing really well,” Jen told us. 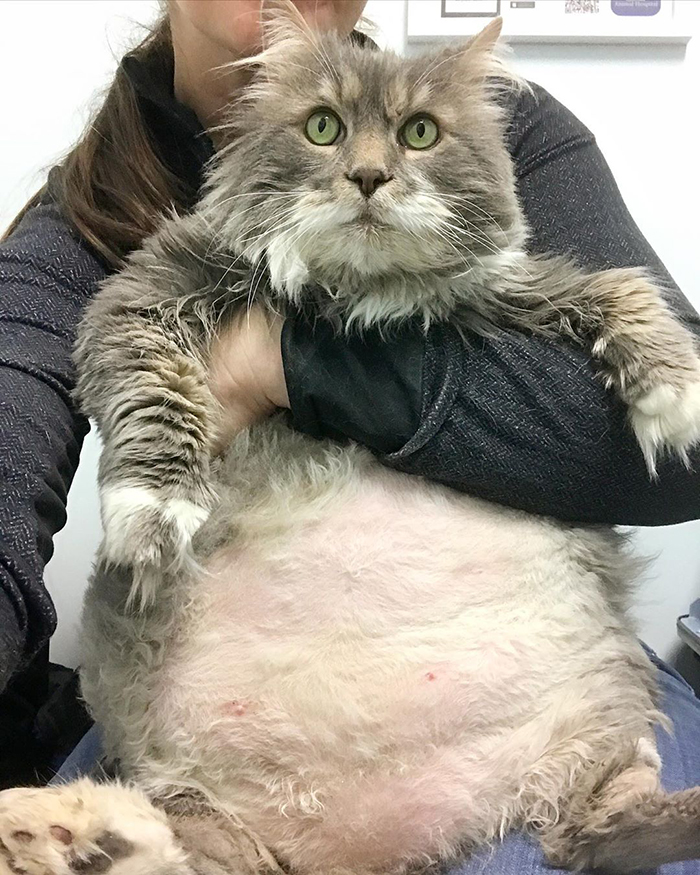 Apparently, the large fluff not only has a big belly but a big personality, too. “He’s playful!” the foster caretakers wrote on their Instagram. “He doesn’t have much range of movement, but he’s super interested in the feather wand and can be enticed to swat at it. This will help us get him some exercise.”

After having spent more than a month with his foster family, Wilford has finally started losing weight. He is eating consistently, having his baths, sticking to his exercise program, and playing with toys. “He needs regular baths because he is incapable of grooming himself. While he doesn’t love them, he is a really great sport about them and doesn’t even mind them as long as you give him lots of neck scratches and back rubs while soaping him up,” Jen from Pokey Pot Pie told Bored Panda. “Wilford also has asthma, so he needs to get medication, administered through an inhaler, twice a day. He’s very good about it!” she added. 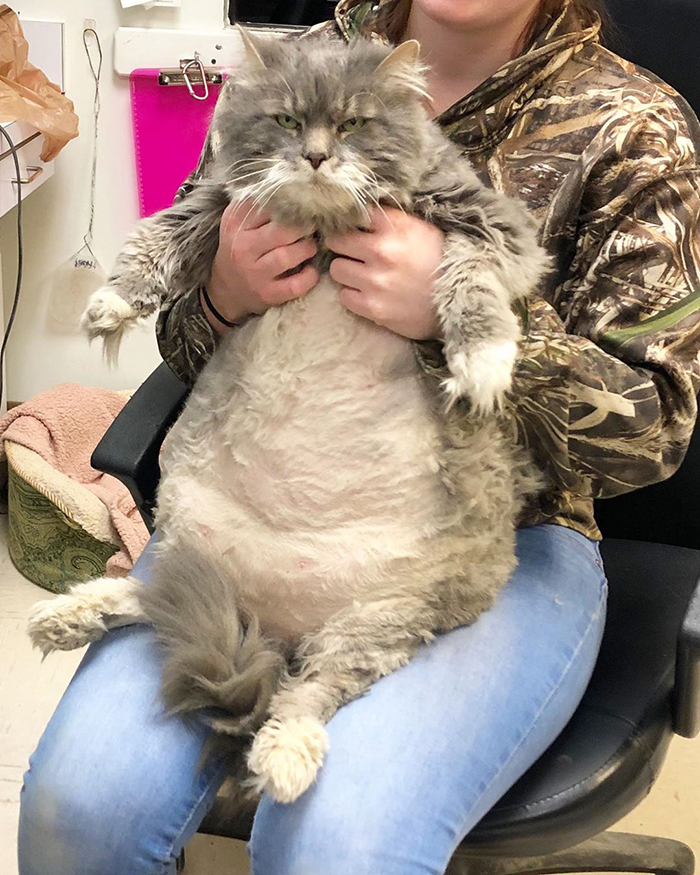 “He’s walking around more, playing more, and acting much more self-assured around our resident cats. I’m so proud of him!” Wilford’s foster family writes. In a couple of weeks, they are hoping to find Wilford a new loving family where he can be safe, healthy, and happy—his caretakers are currently interviewing possible candidates. “There are a lot of people who are interested in the idea of adopting a giant, fluffy, adorably grumpy looking cat, but far fewer people who are still interested when they get a clearer picture of the work that’s actually involved in caring for a severely obese cat. He needs a family that understands his special needs, is dedicated to his weight loss goals, and is willing/able to bathe him several times a week, as he can’t manage to groom himself. He’s an absolutely wonderful cat and to know Wilford is to love Wilford, but he does require a lot of work and needs a home where his people will gladly take that on and love him all the more for it,” Wilford’s caretaker revealed to Bored Panda. Fingers crossed, Wilford will be able to find a new loving home in no time!