Have you heard of the pot bellied pig who saved her owner’s life by playing dead in the middle of the road? LuLu is that heroic pig and after performing her brave and selfless act she was catapulted to celebrity status.

Her human, Jo Ann Altsman, suffered a heart attack while vacationing in the North Woods of Presque Isle, Pennsylvania back in 1998. Jo Ann was struck down in her camping mobile home and desperately needed of help.

Unfortunately, Jo Ann’s husband, Jack, was on a fishing trip and the only other soul around was LuLu. After Jo Ann unsuccessfully tried calling for help, LuLu realized the danger her mom was in and sprung into action. 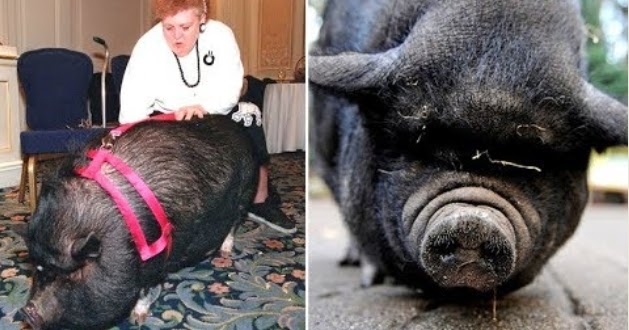 LuLu squeezed through the pet door, somehow managed to get the gate open and ran into the street and laid down in front of traffic. Several cars just drove by her, but one man got out to see what was the matter. LuLu instantly got up and started toward the mobile home where Jo Ann was.

The man, who had seen some cuts on LuLu (which she got in her efforts), yelled out, “Your pig’s in distress.” That’s when he heard Jo Ann holler back, “I’m in distress, too. I’m having a heart attack. Please call an ambulance.” She was rushed to the hospital and into emergency surgery. Luckily she pulled through, all thanks to LuLu’s ingenuity and action!

Of course, word got out about this remarkable pig’s actions and soon after LuLu was appearing on David Letterman and Oprah and becoming friends with George Clooney, who happened to have a pot-bellied pig of his own at the time. 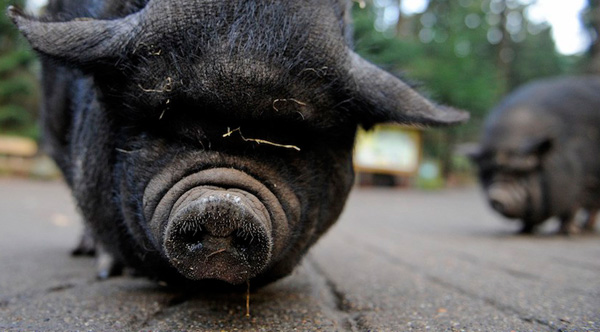 LuLu’s heroic feat also earned her a Humane award from The American Society for the Prevention of Cruelty to Animals. At the fancy luncheon in New York’s Essex House, LuLu munched on peanuts while people lavished her with attention.

After the media furor died down LuLu went back to her favorite pastimes, eating, relaxing and being an adoring pet. Jo Ann said that LuLu would have done anything for a french fry.

The heroic pig passed away in 2003, but she will always be remembered as the pig who played “dead” on a road in Erie and saved her human’s life.