When Jazmin Felder heard meowing coming from a tree in her yard last year, she never questioned whether there was room to add another cat to her current family of four felines.

“I was raised to always take care of what life brought to me,” Felder told The Dodo. “And every time a cat crossed my doorstep, I gave them a home of their own and all of my love.”

Felder didn’t know how long Buddy, a fearful stray tabby, had been hiding between the branches of the tree — but he was clearly pleased to see her. 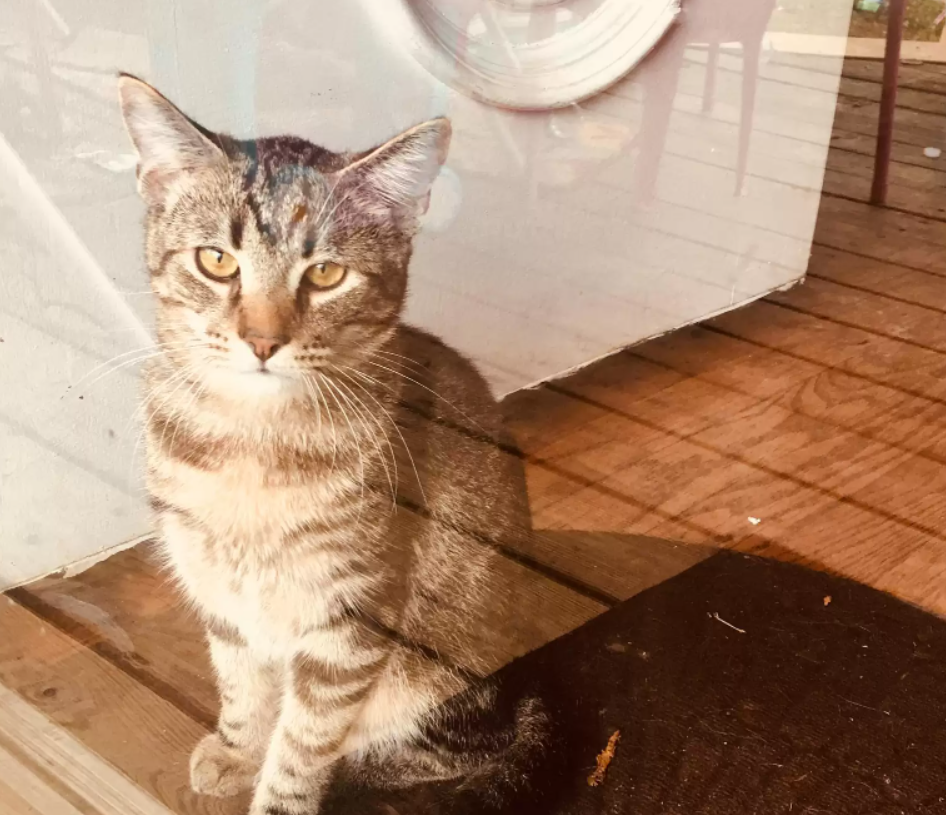 While Buddy seemed grateful to finally be safe and have a roof over his head, he shied away from sleeping or playing with Felder’s other cats. Instead of making friends, Buddy preferred to keep to himself.

Felder was convinced Buddy would always be a loner, until a new addition to the family changed everything.

Six months after Buddy arrived, a 5-week-old gray kitten named Hannah was found abandoned under a neighboring home and, once again, Felder found space for the scrawny kitten to thrive. 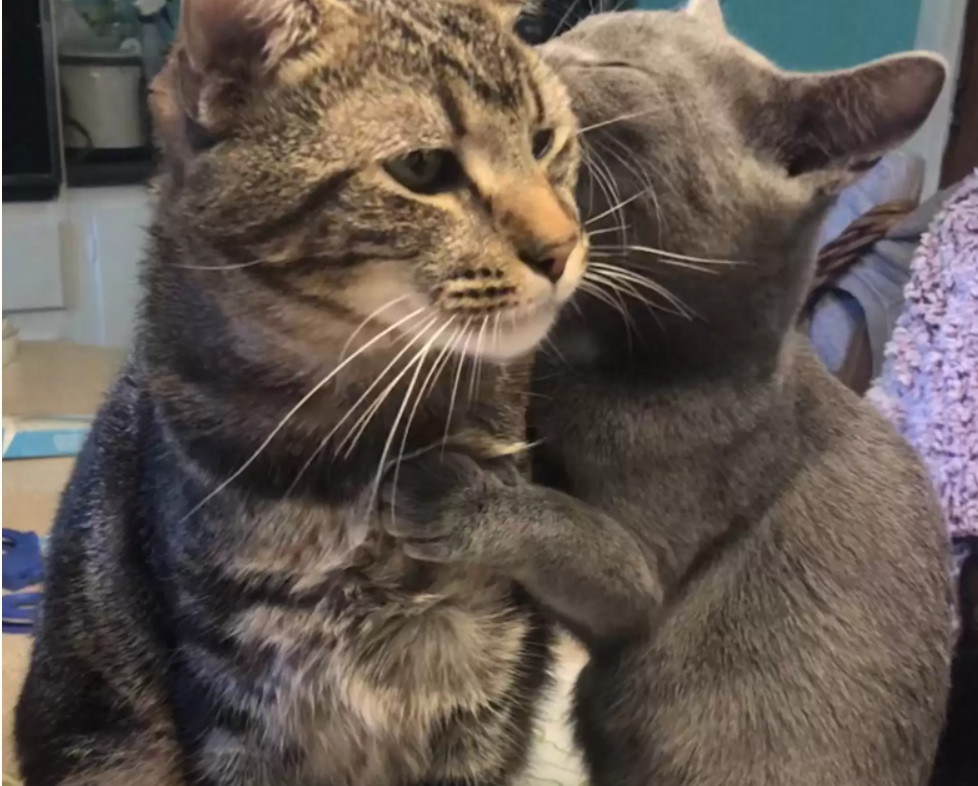 Hannah and Buddy were opposites in every way — where Buddy was serious and withdrawn, Hannah was affectionate and outgoing. “She’s extremely playful, and loves to cuddle up with you and sleep,” Felder said. “She will run around with our dogs like she’s one too.”

Under other circumstances the two cats might have butted heads, but for the first time, Buddy seemed to actually want to be close to another cat.

“When we first brought Hannah home, Buddy instantly came to see her,” Felder noted. “He has always been reserved and shy, but from the first moment of meeting her his entire personality changed.”

Months later, Buddy and Hannah are rarely apart, and it’s not unusual to find the two cuddling on the kitchen counter — Buddy’s paw protectively draped over his bestie.

“They don’t just show affection while grooming one another, they hug and comfort each other,” Felder said. “When friends and family visit they all tease how they want a love like Buddy and Hannah.”

“I think they cuddle and hug each other because they really do care for one another,” Felder added. 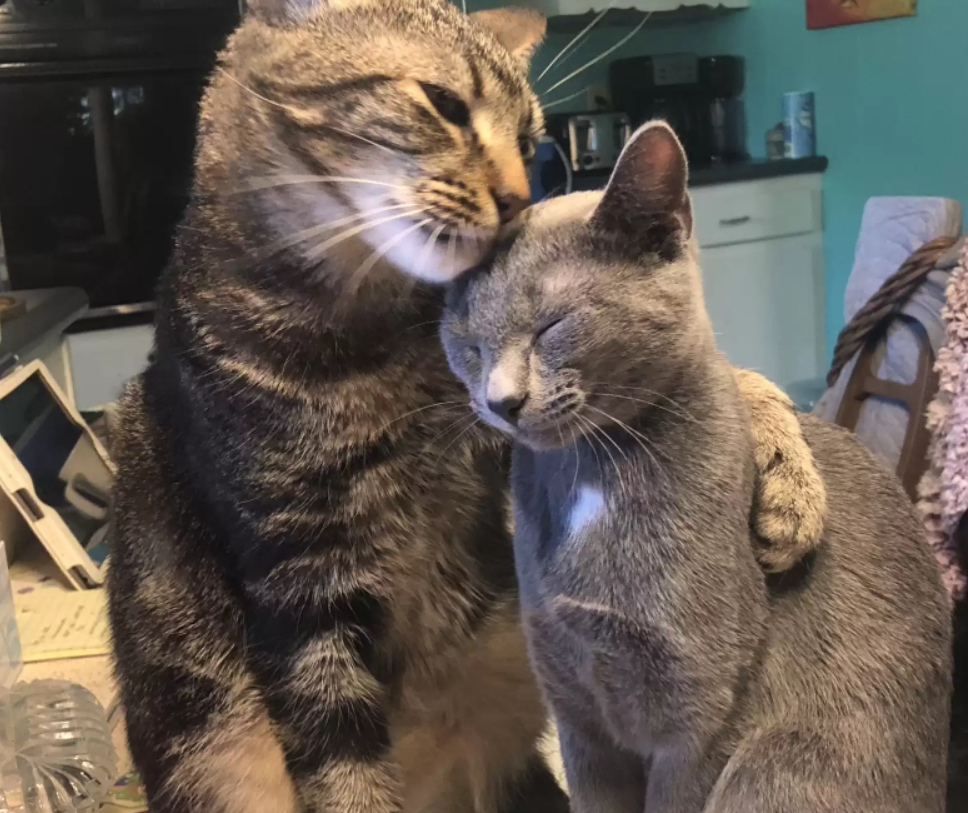 Hannah has become the most precious thing in Buddy’s life — and the once-lonely cat constantly works to show her how much she means to him.

“Buddy will take food and give it to Hannah before he starts to eat himself,” Felder noted. “They enjoy batting cat toys back and forth, and seeing who can reach the top of the stairs first. We are sure Buddy lets Hannah win!”

Not only have all of Buddy’s walls come down, but he has even adopted Hannah’s friendliness. Now, all six rescue cats have finally become one big, happy family — and no cat is left out or sleeps alone. “When you come across one cuddled up and sleeping the next thing you see is all five of the others right there as well,” Felder said.

For Felder, watching Buddy and Hannah’s blossoming relationship has been a true delight: “Seeing the bond they have formed together and seeing how Hannah brings out his happiness melts my heart.”