With his frostbitten ears and old joints, Bubbles was not a candidate for rescue, which is probably why he was at a lot and on his way to slaughter in Mexico.

Sue Chapman and Lari McConegly from Becky’s Hope Horse Rescue were there to save some miniature donkeys when they spotted the horse weaving among the donkeys and heading straight for their trailer. It seems that the old horse was staging his own rescue, determined to beat his fate.

“I firmly believe that he thought if he mixed in with the mini donkeys we wouldn’t notice. ‘I’m just one of them, you don’t see me’,” says Chapman.

McConegly told Chapman that she couldn’t leave Bubbles behind. And so they didn’t. They bought Bubbles and took him along with the donkeys to their rescue. When they posted Bubbles’ story to Facebook it went viral and they received an outpouring of support for him.

“BUBBLES!! A story to warm your heart! When we went to bail the mini donkeys from the kill lot, this skinny, grey gelding walked straight up to our trailer, pass the gates, disregarding the commands of the kill lot employees. He was intent that this was his ride out of there.

“We stood there staring as this old guy with crumbled ears from frostbite waited patiently for the group of mini donkeys to catch up so he could jump on the “freedom trailer” out of there. There was just no way we could leave him behind! 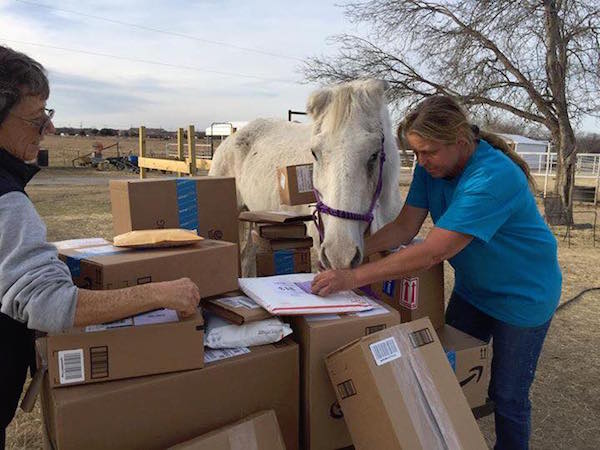 “Thanks to your overwhelming generosity, we had just enough money left over to pay his bail. This sweet, old man won our hearts the minute he decided it was the perfect time to escape the kill lot. It seems that he thought nobody would notice him escaping if he simply mixed in with the mini donkeys!

“Bubbles is now safe here at Becky’s Hope where he continues to hang out with his mini donkey cohorts.”