This adorable kitten has a rare spine condition called scoliosis, which makes her spine twisted. The cat was about to be euthanized when she was saved by the vet and given a forever home. A girl named Mari posted on Reddit (Reddit name MarieGotLost) about her grandparents’ adorable pet named Pitoe.

The images got tons of likes and comments. A lot of people sent love to Pitoe, however a lot of them expressed concern about Pitoe’s size and shape. Mari explained that she only looks fat because of her condition and that she lives a happy, healthy, and pain-free life. 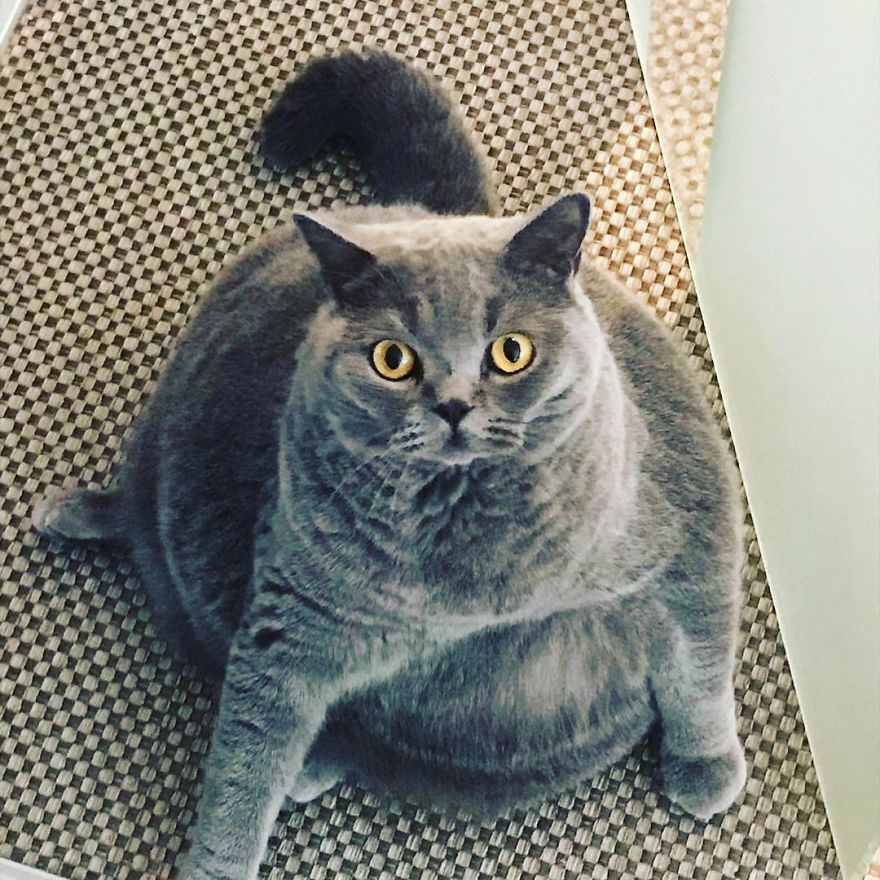 Here’s the story of how the 4-year-old Pitoe joined Mari’s family: “So, Pitoe has severe scoliosis, which makes her body a lot shorter than any normal cat’s. (And because of that, she has grown a lot more in width.) She’s actually my grandparents’ cat. My parents are veterinarians and one day someone—who sells cats—brought in a ‘bad litter’ of cats and they had a lot of issues. Pitoe was one of them. The owner intended to have her put down because who would want a cat like this?”

“My grandparents—who adore animals—had wanted a cat for a while but were afraid to get one, as they feared it might jump over the balcony of their apartment and harm itself. My mom realized that Pitoe—due to her scoliosis—would probably be a very calm kitty and asked if we could give her to my grandparents. The owner happily agreed, and a match made in heaven was created!”

“My grandparents adore her, and she surprised all of us with how well she’s doing. She can’t jump, but she can waddle, run, play, and climb like a pro. All the veterinarians in my family take good care of her and she gets loads of checkups to ensure she remains as healthy as she can be!” 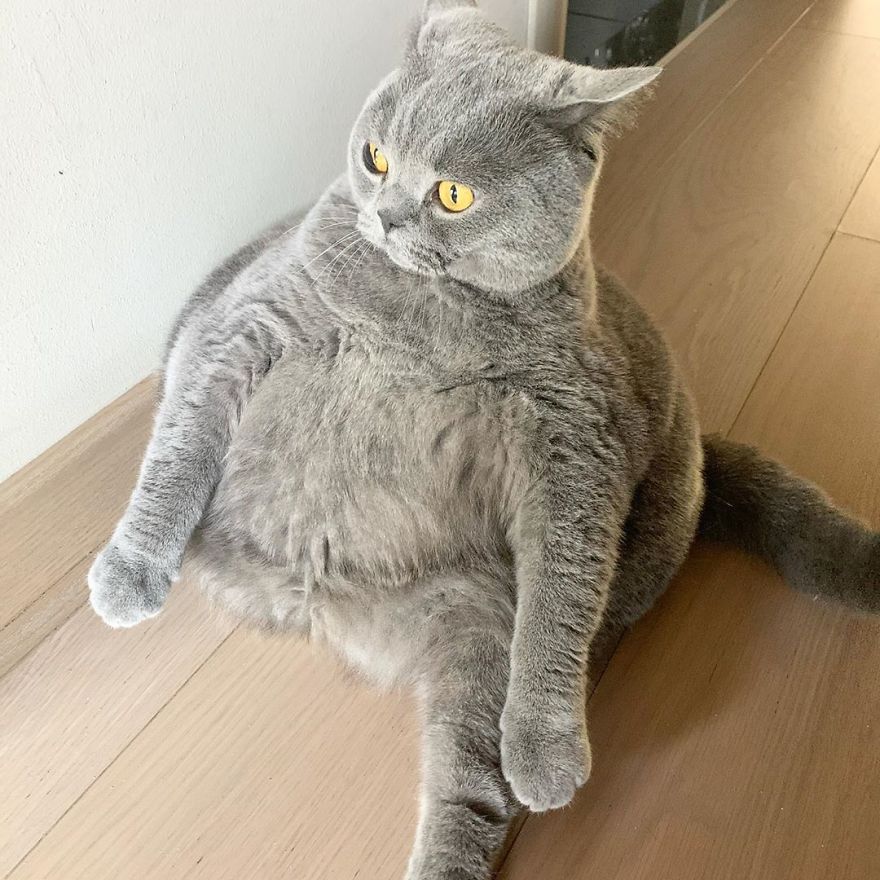 “Pitoe is doing amazingly well with my grandparents and seems right at home in their apartment. She’s absolutely spoiled rotten, to be honest, as most of the day they are at home, so most of their attention goes to little Pitoe (and she’ll gladly accept it.)”

We asked Mari to tell us more about Pitoe: “She’s just the sweetest Kitty. To be honest, she surprised all of us with how playful and active she can be, but around my grandparents, she’s pretty calm, as if she knows she needs to take it easy with them. She loves all attention and will come to ask it whenever there are visitors, so, all in all, she’s perfect! A bit of rebel though, as she loves to throw her water bowl around. (And never the food, which would be so much easier to clean up.)”

Mira shared some issues they run into because of Pitoes condition: “In all honesty, we expected Pitoe to do a lot worse, but she’s actually just fine part from being a crooked little thing. She is pain-free and active. The biggest issue she has is that she’s not as mobile as other cats, for example, she can’t jump at all. She does get loads of follow up to ensure she stays okay and is on a diet, to prevent her from getting overweight.” 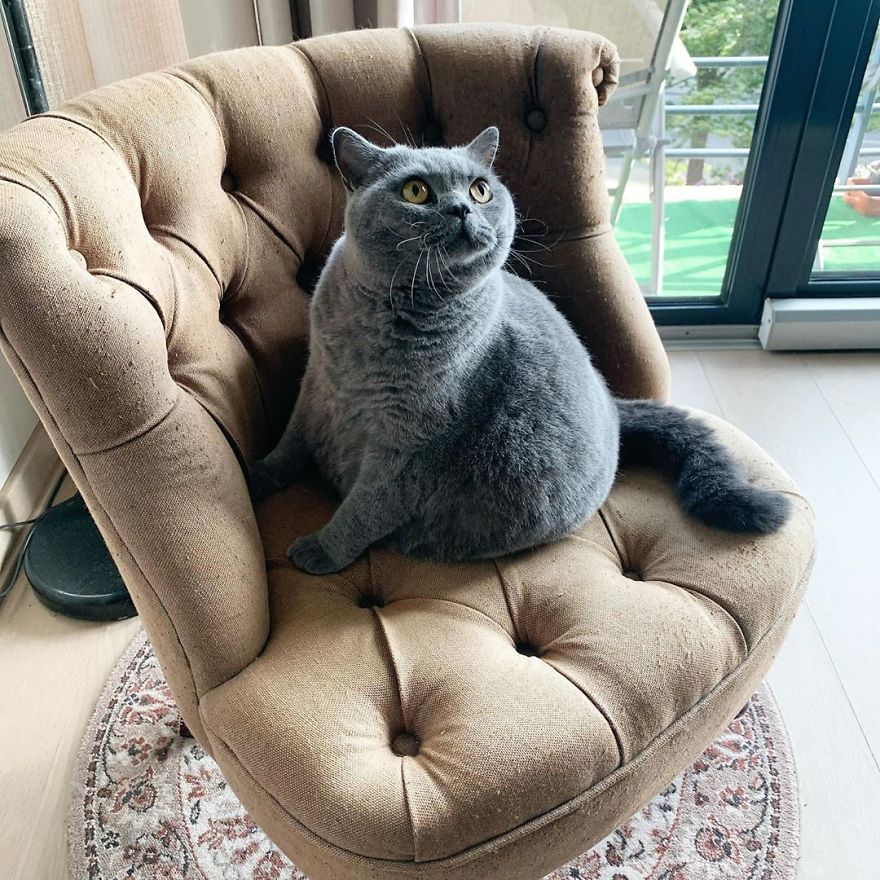 “She’s absolutely fine! She’s crooked and one of her hind legs isn’t as functional, so she often drags. But she has no pain, which is the most important. We do need to keep a good eye out, to make sure it stays that way.” – said Mira when asked about the kittens health and well being.

Mira shared with us that Pitoe loves claiming all the attention, eating, and staring out the window, she also loves people: “The first thing she’ll do when someone knew comes around is waddle towards them and go lie on her back. No one can resist her after that.”

Mira’s grandparents gave the kitten this unique name because they used to have another cat named Pitoe. The grandmother wanted to honor the previous pet by giving this little ball of cuteness the same name.

“It’s crazy to think how close she was to being put down, and now she’s the love of my grandparents’ – and our entire family’s – life. It’s so worth it giving a special needs cat a chance!”

There you have it, the story of this amazing kitten. Pitoe lives her life because someone decided to give her a chance, thankfully she found a perfect match. If you’re ever adopting, why not consider giving an animal that wouldn’t normally get adopted a chance?